In every child’s life there are certain indelible rites of passage. Her first bike. Her first baseball mitt or roller skates or guitar. Her first car.

Yet none of these is more fraught with uncertainty, dread, and potential bankruptcy for you than her first mobile phone. OK, maybe the car; it’s hard to wrap your phone around a tree or get arrested for texting under the influence. But the hazards your kids will be facing on the information superhighway are just as real as those they’ll encounter on the road, if not quite as lethal.

You may also end up spending more for your kid’s data plan than you do on her first car. According to Scratch Wireless, a provider of inexpensive mobiles for teens, parents fork out an average of nearly $10,500 for one child’s phone service between the ages of 12 and 22. In a word, ouch!

A survey by AT&T reveals that the average child receives her first cell phone a smidge past her 12th birthday—and a third of those are smartphones. When should you give your child her first phone? How should you do it? What can you do to minimize the cost and/or pain? Is there any way of getting out of it? The answer to that last question is probably not. Here are the answers to the others.

Nothing says “consumerism gone wild” like the sight of 9-year-olds carrying iPhones. Yet, in the more affluent parts of the country, fourth-graders can be seen carrying digital hand-me-downs from their parents, who reflexively upgrade to the latest Apple or Android handset and think nothing of passing a massively powerful handheld computer to the little squibs.
That’s like putting a Porsche Carrera in the hands of a student driver, says Caroline Jones Knorr, parenting editor for Common Sense Media.

“I think parents often put too much technology in the hands of kids before they’re able to fully understand the consequences of using it,” she says. “And then the kids treat these things as status symbols, instead of tools for communicating with their parents.”

So give younger kids a dumb phone. A simplified feature phone that lets you talk to them and get their location is more than enough for most pre-tweens. Like training wheels on a bike, dumb phones are an excellent way to teach kids how to communicate through technology.

We gave our daughter a Firefly Mobile phone when she was 8. It had two big buttons on it—one dialed Mom, and the other called Dad—plus a third for emergencies. We could control not only whom she called, but also who was allowed to call her. It was cute and colorful, and she lost it within a week. 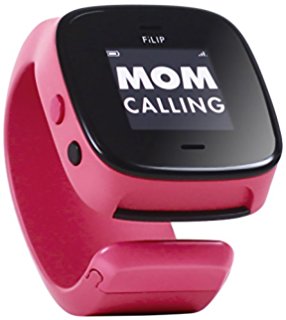 You can still get a Firefly Mobile Glowphone for $50, then add a pay-as-you-go service plan. A better idea? FiLIP makes a kid-friendly wristwatch that functions as both a location finder and a very basic phone (really). The $200 rubber-coated device is designed for tykes as young as 4. (Look for a review of it coming soon to Modern Family.)

If you do decide to hand your old smartphone to your young-ins, be sure to use the phone’s settings to turn off features you don’t want them to access, Knorr suggests. She adds that it’s also a good idea to teach your children how to make a phone call. Because, left literally to their own devices, most kids never would. They need to learn that sometimes the best way to resolve conflicts is to get on the horn and chat about them.

I remember teaching my kids to say hello when the phone rings, goodbye before they hang up, and to leave their numbers when they reach voice mail. I can’t remember my parents ever teaching me these things. It appears to be a lost art.

So what is the right age to get your kids a smartphone?
I’ve asked a lot of people this question lately, and the consensus seems to be middle school. That’s when mobile phones become a necessity—often more for the parents than for the kids. Kids’ schools are farther away, they often have after-school activities, and it’s nice to be able to call or text to say you’ll be late picking them up from soccer practice.

You can get away with a dumb phone here, too, and endure the unending wrath of your teen. (“You’re ruining my life—I hate you!”) Or you can succumb to their smartphone desires and deal with excessive texting, sexting, Snap chatting, cyber bullying, video game addiction, and all the other things that turn parents’ hair gray.

Seattle family therapist Jo Langford says you shouldn’t buy your teen a mobile phone—you should buy her mobile phones. One is the smartphone she wants, the other is a cheap feature phone. Then you hand her a contract that lays out the rules if she wants to keep the smartphone—like, for example, Mom or Dad must have all the passwords to the device and may check it at any time. (Langford offers detailed sample guidelines on his site.) If she blows it, she gets the dumb phone for a while. That gives her the basic safety features you want, without all the digital goodies she craves. Or you can get a smartphone with parental controls built in. Kajeet sells a line of smartphones that let you set time limits, filter websites, and block numbers.

This is your phone on crack

Buying the phone is only half the battle. Now you need to keep your kids from bankrupting you with overage charges. Nobody wants to drop 10 large just so the kids can watch YouTube on their phones all night long.

A prepaid calling card may be cheaper over the long haul than adding your text-crazed teens to your family plan. When they run out of minutes, SMS messages, or data, they’re done—end of story. Or you can opt for a smartphone from Republic Wireless, which use available WiFi connections to place calls for free. If you’re not near hotpots, then you can purchase minutes from a traditional cell carrier.

You also need to protect your investment in modern communications before your progeny lose it, sit on it, or drop it in the toilet.
Hey, no one ever said having kids was cheap or easy. That goes double for managing their digital lives. Think of it as your own rite of passage.
By Dan Tynan